Susan is the Principal Public Relations consultant for Publicize This! 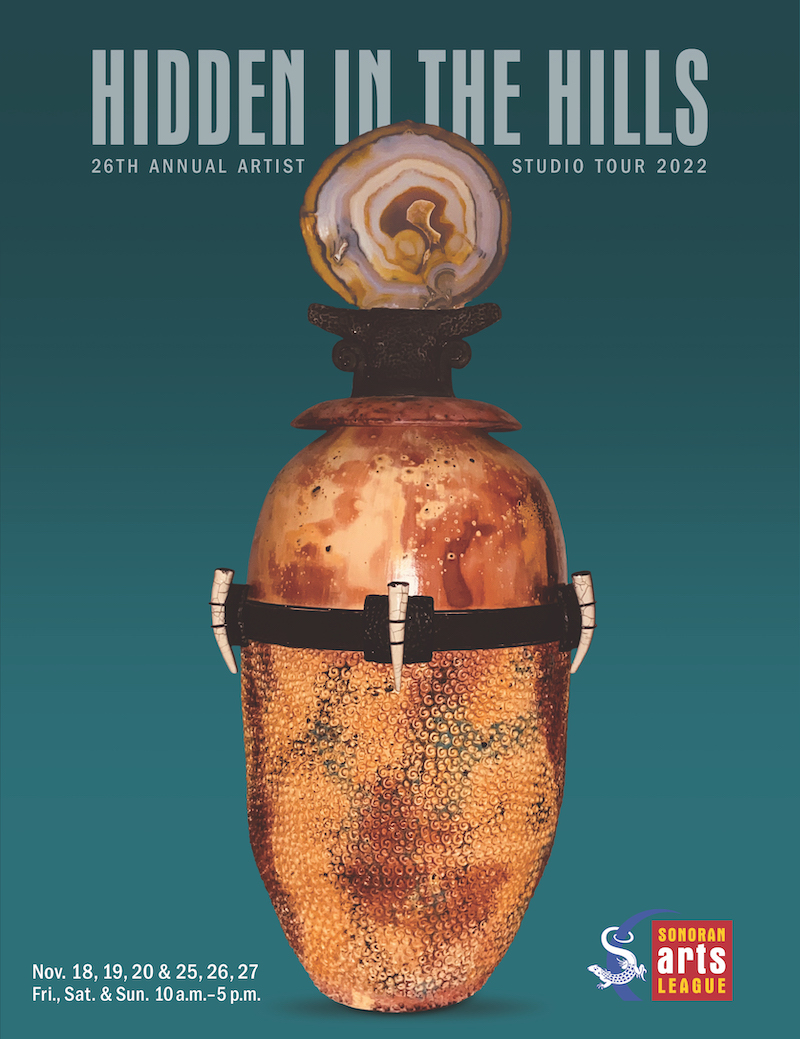 Arizona’s largest and longest-running artist studio tour, Hidden in the Hills, returns for a 26th year during the last two weekends of November: Friday through Sunday: Nov. 18-20 and Nov. 25-27. 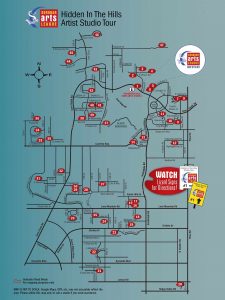 Coordinated by the nonprofit Sonoran Arts League, this year’s free, self-guided tour features 174 artists at 47 studios throughout North Scottsdale, Cave Creek, and Carefree. The popular event attracts thousands of patrons who appreciate fine art and seek a variety of mediums, styles and price ranges. With the event taking place the weekends before and after Thanksgiving, the art tour also attracts holiday shoppers who want to find an original, unique gift. Studios are open from 10 a.m. to 5 p.m. both weekends, giving plenty of time to visit multiple studios.

The League also announced that ceramic artist Myron Whitaker’s stunning vessel, “Large Ferric with Agate” graces the cover of this year’s popular four-color, glossy artist directory. The contemporary, raku-fired piece features rich textures and earthy colors. The inspiration for the piece – a striking Brazilian agate – sits atop the vessel’s handle. A leather band with tusk-shaped ceramic adornments is also a focal point, separating the contrasting textures from top to bottom.

In May, participating artists were invited to submit original pieces for consideration of the artist directory cover during a selection process.

“Myron’s bold, beautiful ceramic vessel took our breath away,” said Jane Boggs, a gourd artist and studio host who serves as the event’s co-chair. “It commanded our attention and we felt it was perfect for this year’s artist directory.”

From 18-Wheelers to Contemporary Ceramics

Myron Whitaker likes to joke that he is “as country as country gets,” something that no one could guess by viewing his large body of contemporary ceramic works. Growing up in Kannapolis, North Carolina, he never imagined pursuing a career as an artist. In fact, he spent more than 16 years manufacturing 18-wheelers. One day, he ran into his high school art teacher who encouraged him to take a ceramics class she was teaching at a local community college. The class fueled his passion to learn more, and within a few years, he left his job to work full-time as a ceramic artist. 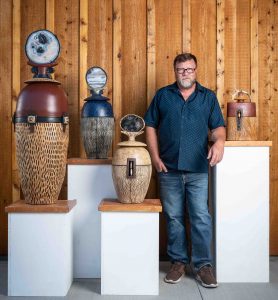 “When I first started doing ceramics, it was pure fun. And then I fell in love with it,” Whitaker said.  “I’m really living my dream. When I sit down on the wheel to throw clay, I know that’s where I’m supposed to be.”

Today, some 14 years later, Whitaker splits his time between Arizona and North Carolina, often traveling throughout the country to participate in prestigious shows and check on his work in various art galleries.

He is best known for his large scale, raku fired vessels.

“Raku is one of the most exciting and rewarding parts of the ceramic process. The anticipation of instantaneously seeing red hot clay pieces evolve into the final glazed and black smoke artwork is the most gratifying part of the journey,” he said.

Whitaker said he is honored to have his “Large Ferric with Agate” vessel chosen for this year’s HITH artist directory cover.

“It’s exciting, especially since the artist directory has become a collectible over the years,” he said, adding that he doesn’t typically give his ceramic pieces titles.

“Ferric actually refers to the firing process,” he explained. “It’s an acid that I pour over the vessel before firing it. In this case, I used more than 40 pounds of clay to create the vessel, and I decided to use ferric instead of a glaze in order to bring out the earthy colors and give it a primitive look.”

He also revealed that the inspiration for the piece was the large Brazilian agate that sits on top of the vessel’s cover handle.

“Before I sit down to throw a piece, I decide which stone or fossil will be a focal point,” he said. “Some people think I create the vessel first, but I need the stone or fossil to guide me as I determine the shape, size, texture, and color palette for each piece.”

This is Whitaker’s fifth year participating in Hidden in the Hills. The talented artist will exhibit and sell his work at mixed media artist Carlos Page’s Studio No. 32 in Cave Creek.