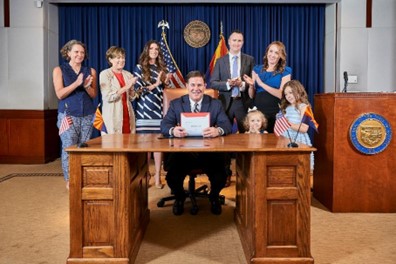 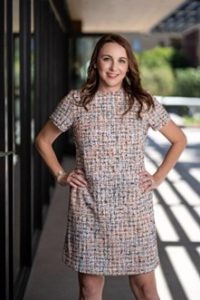 Ahwatukee mom of 3 and Dawning Public Relations owner, Kendra Riley, fights for change with state healthcare reform. After advocating for her own daughter’s life-saving treatment in Italy, the Right to Try Advocate is now making a difference in the lives of children around the country and sharing her story on an international stage.

It was the words no parent ever wants to hear – “Your daughter has a terminal disease and there is currently no cure.” Ahwatukee parents Kendra and David Riley heard those words not once, but twice, as two of their three daughters were
diagnosed with an extremely rare, genetic terminal illness known as Metachromatic Leukodystrophy (MLD) during the height of the global pandemic in 2020.

What ensued in the days, weeks and months to follow changed the trajectory of the Riley family’s lives – all while Kendra was managing – and growing – Dawning Public Relations, which she founded in 2013.

Riley’s name in the business community and her firm’s reputation couldn’t have mattered more. In just one month, the Riley family raised hundreds of thousands of dollars to move to Italy for five months during the global pandemic so their youngest daughter Keira, who was non-symptomatic, could receive the only treatment option in the world for MLD – an experimental gene therapy treatment only available in Milan – while their other daughter Olivia, who was symptomatic, could receive clinical trial treatments that could potentially stall the disease but not cure it.

At the time, Keira was the 31st child in the world to receive this cutting-edge gene therapy treatment at the Ospedale San Raffaele in Milan, Italy. The treatment saved Keira’s life and now at nearly 3 years of age she has never once shown symptoms of the disease – whereas her sister Olivia had already lost the ability to walk, talk and hold herself up by this time.

“Our days are very bittersweet because we have one daughter who had this chance and we watch her thrive each day, yet our other daughter is now enrolled in Hospice and our days with her are numbered,” said Riley. “What we have learned from this experience is that everyone should always have a right to try. If we didn’t have the opportunity to try this treatment for Keira we would be losing two daughters instead of one.”

So Riley is doing what she does best as a public relations owner: she is spreading the word about giving people the “Right to Try.” Since returning from Italy, Riley has become a rare disease advocate speaking at global conferences, helping dozens of families across the nation get the same life-saving treatment as her daughter and offering PR services to families in need, such as via her board position with the AZ-based Armer Foundation for Kids.

She has also been the inspiration of new research in the newborn screening space and this month she will be honored for her courage by the Scottsdale Fire Fighters Association for being instrumental in the passing of Right to Try 2.0 in Arizona.

“Our story is very much one of tragedy and triumph but I knew once we got back home from Italy that if I had the chance to help other families like ours, I would do everything I could,” said the Dawning Public Relations Founder.

On August 9th, 2022 the Riley family joined the Goldwater Institute, Senator Nancy Barto and Governor Doug Ducey for the
ceremonial signing of Right to Try for Individualized Treatments. This new reform builds on the original Right to Try law by protecting patients’ right to try to save their own lives by seeking treatments tailor-made for them that are not yet FDA-approved. This common-sense measure accounts for new innovations in medicine and helps get those innovations to the patients who need them the most.

Riley will also be speaking on this very reform at the State Policy Network 30th Annual Meeting in Atlanta, GA in late September alongside the Goldwater Institute, followed by speaking in London to a team of gene therapy experts about their family’s experience and how this treatment has transformed the life of not just Keira, but their entire family.